​Owen Jones Charity Statement on the Proposed Sale of Land in Northop Hall.

What is the Owen Jones Charity?
The Charity was formed by a bequest of Owen Jones in 1658 and today provides grants for the relief of financial hardship, including to students or for apprenticeships, and to support education initiatives in schools.  The charity currently contributes towards the employment of a Children's Chaplain who works across local schools and churches and is also part funded by the Diocese of St Asaph and local churches.  It also gives educational grants to young people experiencing hardship, and to local schools and community groups who work with young people. The charity is also exploring partnering with another charity to provide accommodation and support for people who have been made temporarily homeless

What is the area of benefit?
This includes the areas of Northop, Connah's Quay and Flint and these areas most closely reflect the Parish of Northop in 1658.

Where did the money come from?
Owen Jones left donations of property, land and money in his will and today the rental income from the grazing land he donated along with that from Wellfield farmhouse as well as investments from the charity’s capital, provide the grant funding.

What is being proposed?
The trustees have a duty in law to act in the best interests of the charity in the pursuit of its objects and to maximise their assets for this purpose.  Following an offer from a developer to buy the land, the trustees consider the most appropriate way of fulfilling this duty is to offer the land for potential sale by informal tender.
The details of this can be found at http://www.jonespeckover.co.uk/search/property-details.php?id=27187795

What happens next?
If the tender process is successful, the trustees would enter into an agreement with the developer and would expect the developer to draw up detailed plans, consult with the local community and seek planning permission.

The sale of the land, by the Owen Jones Charity, would only be completed if planning permission was granted. If planning could not be obtained then the charity will retain the land for its present use.

If the land is sold, what will be done with the money?
The capital received from any sale of land, less any necessary costs, would be invested and this investment income spent in line with the aims and objectives of the charity. This investment is likely to yield an income many times greater than the current grazing rent and could therefore support many more people, projects and proposals across the area.

Are you permitted to sell this land?
The charity originally owned 105 acres of land across the historic parish of Northop
Some land has been sold in small quantities over the years, particularly to accommodate the building of the A55, and one of the charity's two farms was sold in the 1980s.  The charity now owns around 95 acres of land.

Having taken advice, in which the trustees have confidence, we are comfortable that not only does the charity have the legal right to sell the land, we have a duty to the charity and its future work to continue to pursue this sale.

However, given that our legal right to sell the land and our understanding of our duties as trustees has been called into question locally, we believe that it is right and in the interests of openness and accountability to seek further independent legal advice.

We have approached LawWorks who are the Charity Commission's recommended advisers to smaller charities to carry out this review and we will make their findings public.  We have no prior relationship with this company and they in no way stand to benefit from the sale or otherwise of the land.

Isn't the land ‘protected church land’?
Although commonly believed locally, this has never been the case.  The land is not, and never has been, owned by the Church in Wales but is solely the property of the Owen Jones Charity and is not protected from any application for change of use.  The charity regrets that it has, over the years, not been able to dispel this myth.

What’s the relationship between the charity and the Church?
The Charity is a separate legal and financial entity from the Church and the Church in Wales does not control or influence the charity in any way.  Owen Jones’ will stipulated that the Vicar and Churchwardens of Northop should be the trustees of a fund he donated and today they (Vicar and wardens of Northop) are the trustees of the Charity that bears his name.

Owen Jones Charity money cannot be used to support any general running costs or general finances of the Churches in Northop Hall or Northop or anywhere else.  The churches, like other local organisations, can apply for grants which could be given only if they were in line with the charity's aims.

However, the trustees of the Owen Jones Charity have a duty to the charity and its interests to enable it to better carry out its work.  It would not be right for trustees to deliberately undervalue a charity resource in order to promote or preserve their own popularity.

We believe that the planning process offers the best opportunity for concerns to be heard and investigated properly by those with the expertise to do so and welcome and encourage any contributions to that process.

We are also aware that there are potential benefits to the community, both economically and by way of new people enriching our life and we are aware of the wider shortage of housing both nationally and regionally which contributes to poverty, and aware of the evident desire of new people to come and live in a good community like Northop Hall.

About Owen Jones and the Charity

In the late 16th century, a baby was found warmly wrapped in a blanket and tied to the bell rope in the centre of the tower of Northop church. The Vicar and Church Wardens, who were responsible for foundlings, paid from parish funds to have the baby adopted by a poor but respectable couple named Jones. Nothing is known about the early life and education of the child, named Owen Jones, but later on he was apprenticed to a butcher in Chester, worked hard and prospered in the trade. He worked in a community of butchers in Watergate Street, Chester, and was a regular worshipper at several churches in the city, but did not have a shop and was probably a wholesaler or supplier of meat.

In his will of 1658, he bequeathed considerable amounts of money for the benefit of the poor and destitute in Chester and in Northop Parish, but most important was his creation of the Owen Jones Charity. The rental income from 105 acres of land and buildings in Northop,  Soughton (Sychdyn) and what is today Northop Hall,  was used to support widows’ families and orphaned children, to provide education for the young and to prepare them for trade through apprenticeships. The Owen Jones Charity exists today, still fulfilling his wishes.  It's objects are:
The relief of financial hardship of persons living in the area of Northop, Northop Hall, Sychdyn, Connah's Quay and Flint (the historic parish of Northop). This includes the provision of sums of money to aid students in further and higher education...and apprentices entering trades. Additionally sums of money to support educational initiatives including the primary and secondary schools or tertiary colleges in the area, to achieve success in special educational projects that will provide long-lasting benefits to all of their pupils or students.

The charity currently contributes towards the employment of a Children's Chaplain who works across local schools and churches.  It also gives educational grants to young people experiencing hardship, and to local schools and community groups.

The charity is also exploring partnering with another charity being set up locally to provide accommodation for people who have been made temporarily homeless and to help them get back on their feet.

The charity has recently invited informal tenders for potential development of a 15.8 acre site in Northop Hall and a full statement on this can be found above.

Owen Jones died in 1659, his grave on the South lawn of Northop church marked today by a memorial slab installed in 1751. He was at least 69 years old, as his baptism is not in Northop parish records, which only started in 1590.

The relevant section of Owen Jones' will of 1658 founding the charity is below.  He also left gifts to individuals, to Northop Church for renovations and set up charitable funds in the Chester area. 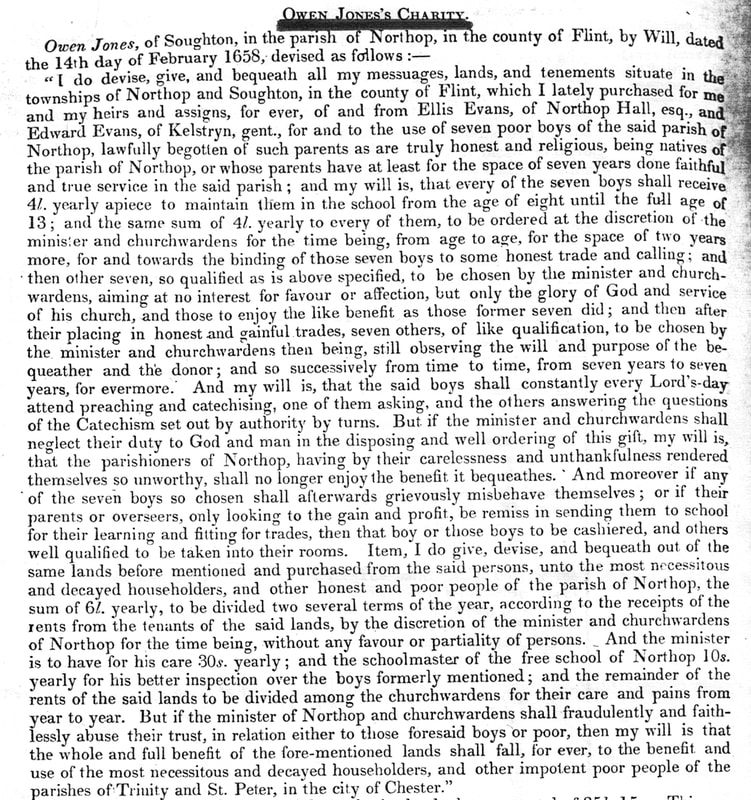