A Brief History of St Mary's, Northop Hall
NOTE THAT NORTHOP HALL IS NOW CLOSED AS A CHURCH
IT'S FUTURE TO BE DECIDED

Since at least the beginning of the 19th century, Northop Hall was served by both Chapel and the Methodist church, but members of the “established “ church had to trek to Northop to worship. In the 1880s, an iron building, the “Iron Mission Room” or “East Northop Iron Church”, was erected, under the auspices of the then vicar of Northop parish Archdeacon Smart, across the road from where the present church would be built. This was used for regular services and latterly supported at least two services every Sunday.

Initial ground work started in August 1910 and the foundation stone laid on October 27th 1910, as reported in the Liverpool Courier of October 29th 1910. The roof was ready for slating by May 1911 and the Parish Magazine predicted that when completed “it will be one of the nicest churches in North Wales”. 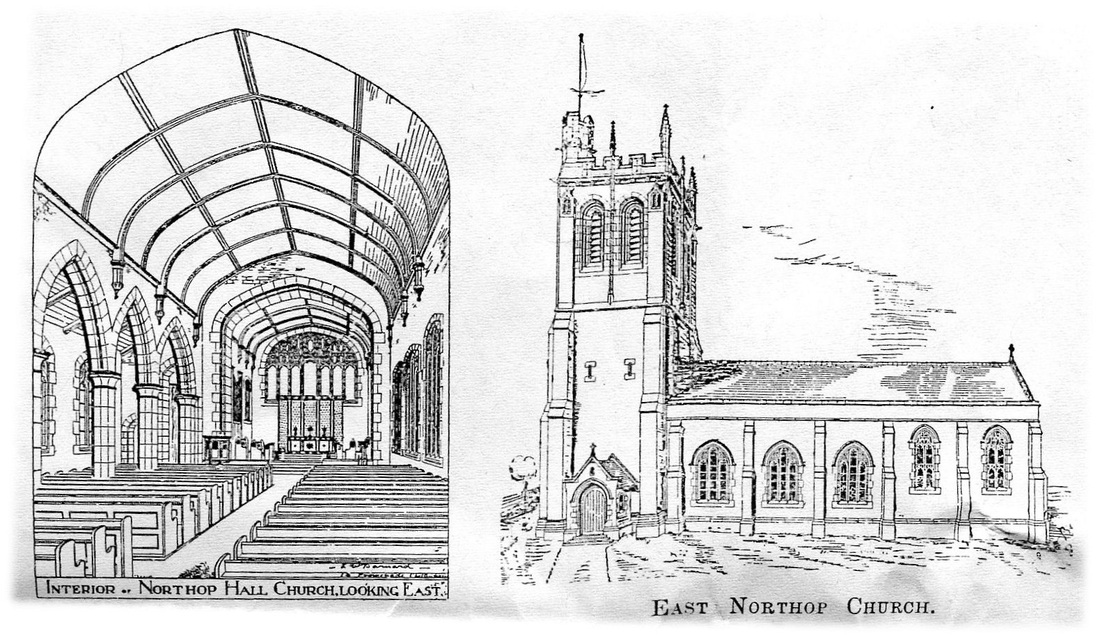 The Church was completed in 1912, although for some undocumented reason, perhaps funds, the tower was not extended above the main roof level, and so it remained for 50 years. This incomplete tower was obviously “planned” since the Parish Magazine of September 1910 states that “It is not the intention at present carry the tower higher than the ridge belt”. Again, no reason was given.

The church was dedicated to St Mary. A chapel of with the same dedication had existed at the parish church of St Eurgain in Northop, but had been “lost” during a renovation! (The mind boggles as to how one can lose a chapel).

The consecration was scheduled for the 12th April 1912, but a rather agitated exchange of correspondence shows that the deeds did not arrive at the Ecclesiastical Commission and thence the Diocesan Registry at St Asaph in time for this.

In August 1913, the Northop Parish magazine reports that the path to the church entrance was paved and the work was of good quality and should last well!

There appears to be no musical instrument initially, and a quote for a suitable organ was provided by H. and H. Whitely of Chester in April 1914. This was approved and once again a subscription initiated, but the organ seems never to have been purchased. No documentation has been found to explain this and all the records relating to the new organ installed in 1931 make no mention of a previous organ. Equally, no record has been found of how music was provided at that time. It is suggested that a harmonium was used and for some time there was a broken down harmonium at Northop, reputed to have come from Northop Hall

In 1915, the lighting was converted from petrol gas to acetylene, at a cost of £30. This money was again raised by subscription.

By 1930 the need for a good organ was apparent and the PCC minutes for January 1930 record proposals to provide an organ. A design was submitted by Rushwood and Draper of Liverpool for an organ to be installed in the Chapel of Ease (a location established in the original plans as can be seen in the drawing). The cost was £1000 and the PCC meeting of 15th December 1903 agreed to proceed. This is an excellent instrument as can be appreciated from the more recent comments made at the 75th anniversary concert in 2006. The organ was dedicated on June 28th 1931 by the Archbishop of Wales, and this was followed by a recital by Dr Middleton, organist at Chester Cathedral.

At this time modernisation was in order and a Faculty issued to update the lighting to electricity and also install the organ was granted on 28th January 1931.

In September 1935, the church was given the sad news that Canon Vaughan, vicar of Northop Parish since 1908, was retiring. He has seen St Mary’s through from idea to completed church. 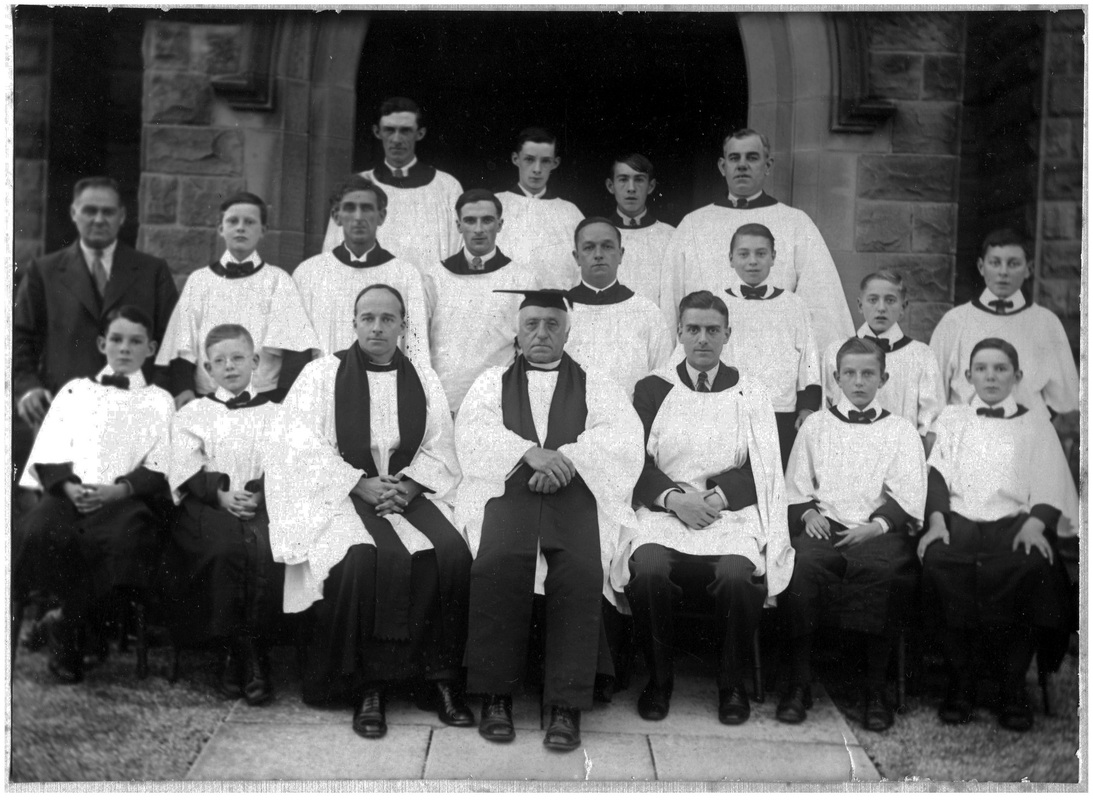 St Mary's Choir with vicar Canon Vaughan, Curate Rev Tudor Jones and orgainist Mr T Roberts
The members of St Mary’s had obviously been discussing how to commemorate the 50th anniversary of consecration because the PCC minutes of May 12th 1958 record that the matter was discussed and that there was considerable enthusiasm at St Mary’s for an extension to the tower. The meeting agreed to proceed. The PCC of February 1961 was told that the tower would cost over £2000 and that £1500 had already been received. Plans were revised and by September 1961 two alternatives were proposed, one with a spire with alternative tiling arrangements.

The spire was deemed as too expensive at £4400 so a simplified version of the original scheme was chosen, without the bell louvers and the turret over the spiral staircase, still at a cost of £3505. The increasing cost of the work severely exercised the PCC who were quite incensed that, although the initial estimate given in 1958 of £2200 was held in 1960, by 1962 it had increased to £3505. Once again a subscription list was set up. The tower was completed and dedicated, together with the clock donated by Mr H.G.Hughes, by the Bishop of St Asaph, Dr. Bartlet on December 30th 1962, as reported in the PCC minutes of 11th February 1963, although it was noted that the tower was still not completely paid for. There was a very touching adjunct to the service; in the choir were Fred Jones and Alfred Peers who had sung together, at the tender age of 8 years old, in the choir of the East Northop Iron church, making a living link with the old church.