About Northop Parish Church and its History 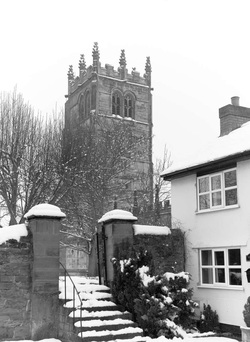 You can download the Northop Heritage Trail leaflet here:
http://www.northop.org.uk/phocadownload/HeritageTrialLeaflet_small.jpg

The Church of Ss Eurgain and Peter is situated in the village of Northop (otherwise known as Llaneurgain) Flintshire in North East Wales. St Eurgain and St Peter's church is a member of the diocese of St Asaph, the Church in Wales.
Many may unknowingly have seen the church while travelling through North Wales as the distinctive pinnacles of St Peter's tower are visible alongside the busy A55 expressway. As with many Welsh villages the church is the centre-piece of the village, and indeed would have been at the heart of village life for centuries.


Find out about the history of the church after the slideshow below.

The church was originally dedicated solely to St.Eurgain (mid 6th century) who was a niece of St.Asaph. She is understood to have come from Cilcain and then to have founded the Christian settlement and parish here (Llaneurgain), which nowadays also includes the villages of Sychdyn and Northop Hall. A building was documented in 1254 and 1291, when it was on the site of the current North aisle. It was extended East in the 14th century with a crypt beneath the new sanctuary. An arch at the East end of the arcade and 2 corbels in the nave (all relocated) are also 14th century. The church was substantially enlarged in the 15 – 16th centuries under the patronage of the Stanley family. A new nave and chancel were added to the South and a simple arcade inserted. The 98 feet high tower is said to bear a date of 1571 on a gargoyle, although it was probably started earlier in the 16th century.

In 1839-1840, following reports that the church structure was unsafe, the building was remodelled by Thomas Jones, architect of Chester and County Surveyor of Flintshire. This included shortening the church and reducing the arcade from 7 to 5 bays, and rebuilding the outer walls of the nave, chancel and aisle. A plaster vaulted ceiling was inserted into the tower and four recumbent effigies were reset into the North wall. In 1850, the East wall was rebuilt by William Butterfield in memory of the Rev. Henry Jones, including a new Geometrical window. John Douglas, architect of Chester, undertook a further restoration in 1876-7; a new set of furnishings including organ case and altar were added and the old box pews and West gallery, over the main entrance, were removed. Painting and enrichment of the reredos and altar, respectively, were undertaken by Hardman & Co. in the 1870s. The church windows include 19th to early 20th century stained glass by a range of notable makers: Clutterbuck; O’Connor; Ballantine & Son; Saunders & Co.; James Powell & Sons and Hardman. Worn stonework on the West door was renewed in 1965, including the heraldic badges of the Beauforts (Margaret Beaufort was the mother of Henry VII), the Stanleys and the Tudor Rose, symbolizing the union of the Houses of Lancaster and York.

The church is in Perpendicular style, with a West tower constructed of fine coursed sandstone ashlar. The tower is 5-stage with full-height diagonal buttresses with offsets, a plinth and string courses between stages, all with moulded copings. Four bands with blind quatrefoil or cinquefoil decoration, are located beneath the string courses of the 1st and 2nd stages. Large ornamented pinnacles are situated at angles of parapets and to centres of the sides, with large gargoyles to the angles.

The main entrance to the church on the West side of the tower is surrounded by a renewed Tudor-arched doorway in a square surround under a prominent hoodmould with flower bosses; each spandrel bears an armorial shield. The 1st floor string course is broken by a large panel-traceried West window, 4-light under a shallow pointed head with a continuous hoodmould. The South side of the tower has a tiny stairlight with round head under a square hoodmould to the left of the 1st stage. Similar stairlights aligned as above to 2nd, 3rd and 4th stages are all now blocked. Breaking the 1st stage string course is a tall narrow statue niche with ogee head. The 5th stage louvres indicate the bell chamber, containing 8 bells and a priest’s bell. The earliest bell is from the 17th century, the latest are two recast bells and two new bells from the 1890s.

The nave, chancel and North aisle were remodelled in the 19th century and are of snecked pecked sandstone. The aisle is gabled, lower and narrower than the nave but of equal length. The nave and chancel together comprise 6 bays, articulated by stepped full-height buttresses supporting diagonally set shafts and ornate pinnacles. High battlemented parapets on a moulded string course surround the building. The East end is two-gable, with diagonal buttresses to angles. A buttress between gables supports an octagonal chimney. There is no fireplace, but the chimney now serves as a vent for the oil-fired heating system, situated in a brick chamber on the site of the old crypt. The modern oil storage tank covers a deep well, date unknown, once used to provide water for a coal-fired boiler.

Where the South East corner of the tower joins the nave wall there is an angled space closed off by an old iron gate. The purpose of this gate is unknown, unless it was to discourage persons concealing themselves in the secluded niche.

There is a 5-bay arcade to the North aisle, with octagonal piers with ringed capitals and bases, supporting pointed double-chamfered arches. The fine Perpendicular tower arch has 3 orders of continuous roll mouldings, semi-octagonal capitals and a Tudor head. Corbels are plain except two to the North bearing heads and beasts from the 14th century. The tower has a vaulted plaster ceiling, the ribs supported on corbels bearing figures including angels, with a central circular opening for a bell rope. A narrow pointed doorway to the South gives access to the stairs; the church’s main entrance is covered by a wood - panelled half-glazed lobby; the tower floor is flagstone.

The late 19th century fittings and furnishings (from ca.1877) include wooden pews with moulded decorated bench ends, an octagonal wood-panelled pulpit on a stone base, a decorated reading lectern and a pipe organ. A polished stone circular font has round-arched motifs and clustered circular shafts. The font and the capping stones on the chancel walls are made from an unusual dark, hard limestone containing many interesting fossilised remains. Steps up to chancel and sanctuary lead to choir stalls, an open brasswork altar rail and a wooden altar table with openwork, including cusped lancets. (The table and organ case are favourably mentioned by Hubbard, see references below). The stone reredos has 3 stepped panels, bearing Christ and angels. The walls are painted with heraldic shields and biblical scenes.

In the North wall of the aisle are 4 round-arched recesses containing recumbent effigies. (The effigy at the East end is in the vestry). From the West, the first is of a knight (late 14th century and possibly unfinished); the second and third are of Ithel ap Bleddyn and Leucu (died 1382), possibly his wife. Her head is on a cushion framed in an arch, with a lion at her feet. The 4th effigy is of another knight, ca. 1400. Behind one of the knights are 2 fragments of sepulchral slabs bearing part of a circular cross head and a sword hilt, one commemorating the wife of Bleddyn, the other David. There are many 18-20th century memorial tablets in the church, including on the North wall a tablet with urn to John Lloyd (died 1815), and a tall marble tablet with a pediment and egg and dart moulding to members of the Lewis family (19-20th centuries). To its right is a brass tablet in memory of Edward Williams of Soughton (died 1741) and further right is a square moulded tablet with frieze of quatrefoils to the Rev. John Conway of Lower Soughton (died 1827). Set into the chancel floor is a stone tablet to the Rev. John Wynne, Bishop of St. Asaph and Bath and Wells, of Soughton Hall (died 1743). In the tower are marble memorials to the dead of two World Wars.

The stained glass windows include: The Crucifixion with 4 Apostles (East window) by O’Connor, 1850; Resurrection (South chancel) also by O’Connor, in memory of Edward Lewis of Bryn Edwin (died 1833); St. John and St. Paul (1870s). The large West window, by James Powell & Sons (1893) depicts biblical scenes. One of the South wall windows carries the names Huntley and Muspratt. The names also appear on a large monument in the churchyard outside the East window and are related to the families who owned the alkali works of Muspratt and Huntley, operating in Flint from the mid-19th century.

“The Parish church of St. Eurgain & St. Peter is listed grade 1 as an exceptionally fine Perpendicular church. The tower, tower arch and arcade are notable, with the external 19th century remodelling leading to a coherent architectural entity in the style. The tower, together with those at Wrexham, Gresford and Mold, form the most significant group of late medieval church towers in Wales”.

(This statement and much of the above text are taken from the Welsh Historic Monuments official listings documents, CADW, August 2001).

When the re-roofing of the nave commenced in 2003, stripping off the old lead revealed the 16th century oak boards underneath, confirming that the 1839 remodelling involved a rebuilding of the walls, while retaining the original roof. The roof boards are interesting; they have many signs of old peg holes and mortice and tenon joints, suggesting that the timber was second-hand, perhaps from shipbuilders on the River Dee.

For more information on the church and on the village of Northop, see ‘The Pride of Northop: A Collection of Stories of Northop’, by Roy Edge, (2001).

Parish registers from 1590 with many other parish documents are held in the Flintshire County Records Office, Hawarden.

Hubbard, in Pevsner Architectural Guides:The Buildings of Wales: Clwyd, (YUP 1986) says:
The stately 16th Century tower of St Peter and St Eurgain’s dominates the village, and the church remains an impressive medieval building despite much later reconstruction.  Inside the tall, five-bay arcade of the north aisle and the fine panelled roof of the nave are also perpendicular in style and date.  The outer walls are later, having been rebuilt in 1839-40 by Thomas Jones with windows in a similar style: at this time the length of the nave was reduced by two bays, yet the church is still strikingly spacious.  Jones provided the alcoves along the north wall to house an interesting series of effigies dating from the 14th Century.  The east window with its vigorous geometrical tracery and painted surround was designed by William Butterfield in 1850.  Northop Church is noted for a fine set of furnishings by John Douglas installed during a restoration of 1876-77: they include an altar table and organ case with carving of high quality.  Hardman &amp; Co designed the beautiful reredos with its gilded background.  The austere rubble facing of the walls is relieved by a colourful series of stained glass windows by various makers of the 19th Century.  In the churchyard is the Old Grammar School, built in or soon after 1608.